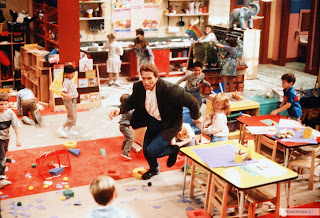 In this era of progressive upsurge, we’re at a point where we should start translating aspirational demands, in other words, stuff that just isn’t going to happen right away, into practical terms, which includes consideration of potential difficulties.

One such demand that appears increasingly within reach is the goal of universal child care. Senator Elizabeth Warren has put a specific proposal forward, and Matt Bruenig has offered a full-blown program of aid to families with children. Kathleen Geier covers the Warren plan here, and she argues with Bruenig about one aspect of the latter’s plan here.

It should be clear that the world would be better with either of these options, as well as with Geier’s suggested modifications.

I only want to address Geier’s argument with Bruenig, which hinges on the issue of child care subsidies for at-home care, in other words, for parents (usually mothers, which is an issue discussed below) caring for their own children at home. Bruenig is for it, Geier is against.

Geier favors a network of excellent, tax-funded facilities, open to all. I would welcome this as well. The dilemmas arise not in the abstract, but in the real. In other words, what would we actually get if the government set out to construct a network of excellent, free facilities open to all? The point is to think about the consequences of implementation. What could go wrong?

The bottom line is nothing is easy. Every positive feature of a new arrangement entails a possible trade-off with some other desirable attribute. I can’t tell you where to come down among these alternatives. I can say with confidence that these issues are likely to loom over the realization of any new system.